Skip to content
AU OFFICE 365 EMAIL
ALBANIAN UNIVERSITY > News > In a special ceremony, Albanian University awarded today the title “Doctor Honoris Causa” to Mr.Karl Fink with the motivation “For human values and distinguished contribution of Mr .Karl Fink, as well as his broad and continuous support for humanitarian organizations in social projects aiming to help children and families in need” 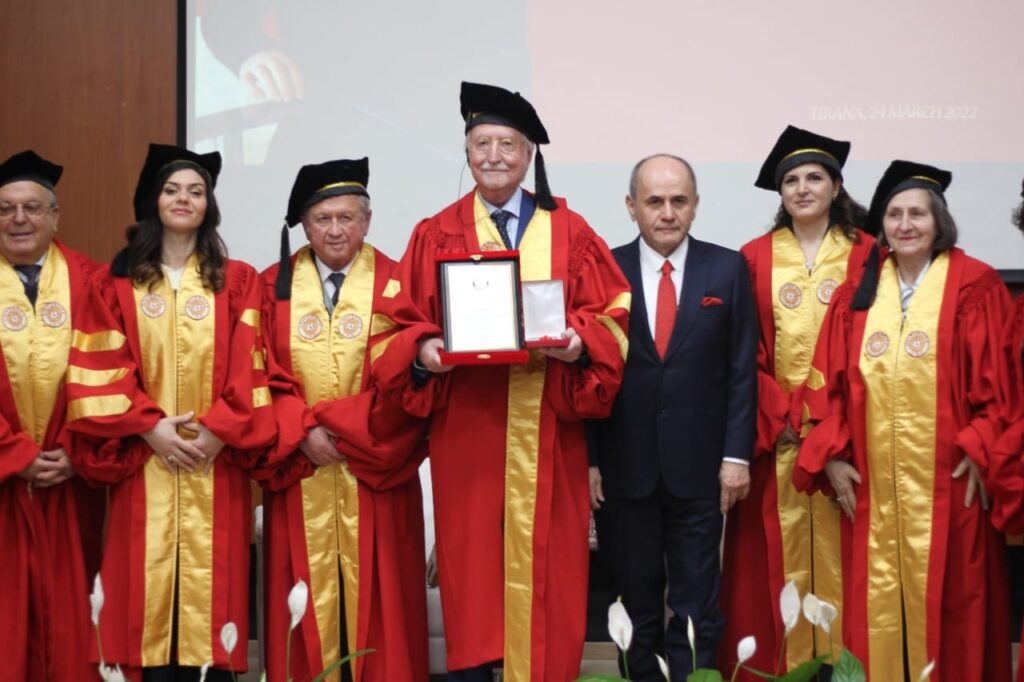 Upon proposal of rectorate, Senate of “Albanian University”unanimously voted to confer the title “Doctor Honoris Causa” on entrepreneur, humanist, intellectual and Austrian dignitary Mr. Karl Fink, who showed a magnificent social and human dimension during his entire career in support of sensitive social causes.

During the period he headed “Vienna Insurance Group”, upon his initiative were undertaken social support initiatives aiming to help target groups in need in Austria and the Balkans.

Mr. Fink has a special bound with Albania because has continuously helped charity organizations working in our country for well-being and education of our children, healthy growing up of children with special needs, physical or social needs, orphans, the elderly, families in need, providing a precious contribution in easing their problems, focusing on a better contribution for vulnerable persons. Likewise, he offered his help to many Albanian students to study in Austria.

In his speech, creator and founder of “Albanian University”, Mr.Astrit Veliaj said that “Men like Karl Fink did not work for titles. Works are the jeweleries of their life. It comes a moment in life when a person does not go after money but tries to serve the needs of a better world – this is the essence of valuable people. These are the highest qualities of a leader. This a “merited” Honoris Causa title.

In his speech, Mr. Veliaj pointed also to the history of Albania-Austria relations,  “Albanian people have always been close to Austrian dignitaries. Austria has given a great contribution in declaration of independence and strengthening of national dignity. Austria was a place where Albanian national dignitaries were educated, such as Lasgush Poradeci, Eqerem Çabej and thousand of intellectuals of our time. Austria is home of distinguished Albanologists, Norbert Jokl and Maximilian Lambertz.

Austria is home of Mozart, Beethoven, and philosopher Karl Popper. Austria is also home of Karl Fink. Austria is the country of distinguished dignitaries, who have enlighten Europe and humanity!”

Mr. Karl Fink said he was very touched from this assessment from “Albanian University”, underlining “I am proud and happy to hear your honoring words for me. In my 42 years as an insurance manager, I have always been a man of practice. I value thinking and doing over talking. “

Later on, he focused on ethical principles that lead his leadership highlighting “It is very important in politics and business to create an open hierarchic system where you surround yourself not by “Yesman”, but with critical and open minds that dare to challenge your ideas.”

He also informed that will enable a study visit for 10 students from “Albanian University” in the headquarters of Vienna Insurance Group in Vienna.