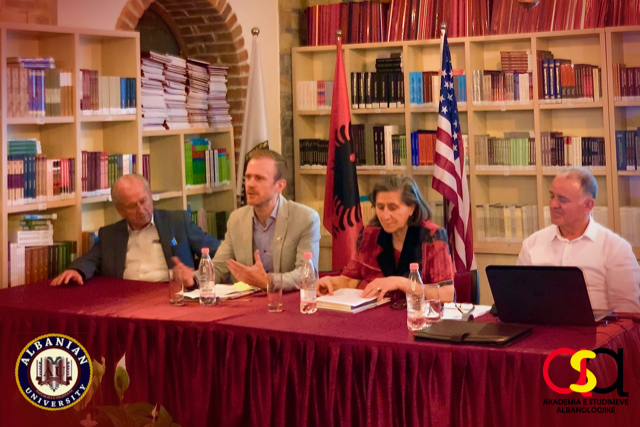 Attending the meeting beside students and members of academic staff were also Rector of  Albanian University, Prof. Dr. Pavllo Kongo and the guest Mr. Jeffery Warner, Director of Peace Corps Programming and Training of US Government in Albania, who held a speech on the occasion and focused on the role of Peace Corps volunteers in completion of public services of the type from people to people at individual level. He said that these volunteers come from all over USA and work side by side with their Albanian partners in the field of education, health and organisational development, serving and collaborating with communities in the entire territory of Albania since 1992 turning into true ambassadors of the friendship of Albanian – American relations.

In his lecture, Prof. Dr. Hamit Kaba focused on some key moments of the bilateral relations, such as establishment of diplomatic relations in July 1922 and official granting in February 1925 by USA of the status of most-favoured-nation; recognition of Albanian Kingdom and King Zog before England and France and its positive consequences for Albania; cultural, educational and economic relations between two countries during King Zog period; relations of Albanian community in USA and those of King Zog with US government.

Later on, Professor Kaba highlighted the role of USA as an ally of Albania during WWII and challenges of post-war construction of Albanian state; unsuccessful efforts for re-establishment of diplomatic relations in 1945-46 period and reasons for this failure. During the lecture were also underlined the Soviet-Albanian split in 1961-62 period and US “hands off policy”; US efforts for re-establishment of diplomatic relations in the 70-80-ies and continuous refusal of communist government until re-establishment of these diplomatic relations in March 1991, as well as efforts for development of democracy in Albania.  This scientific activity was hosted by dean of Faculty of Social Sciences (FSHSH) Prof. Dr. Kaliopi Naska, who praised the organisation of this event and thanked the historian Prof. Dr. Hamit Kaba for presentation of the history of these relations and Mr. Jeffery Warner for his presence. Discussions held by Assoc. Prof. Dr. Enver Bytyçi and Dr. Etleva Babameto, as well as questions asked by students shed more light on the relations between Albania and America in the course of these 100 years.