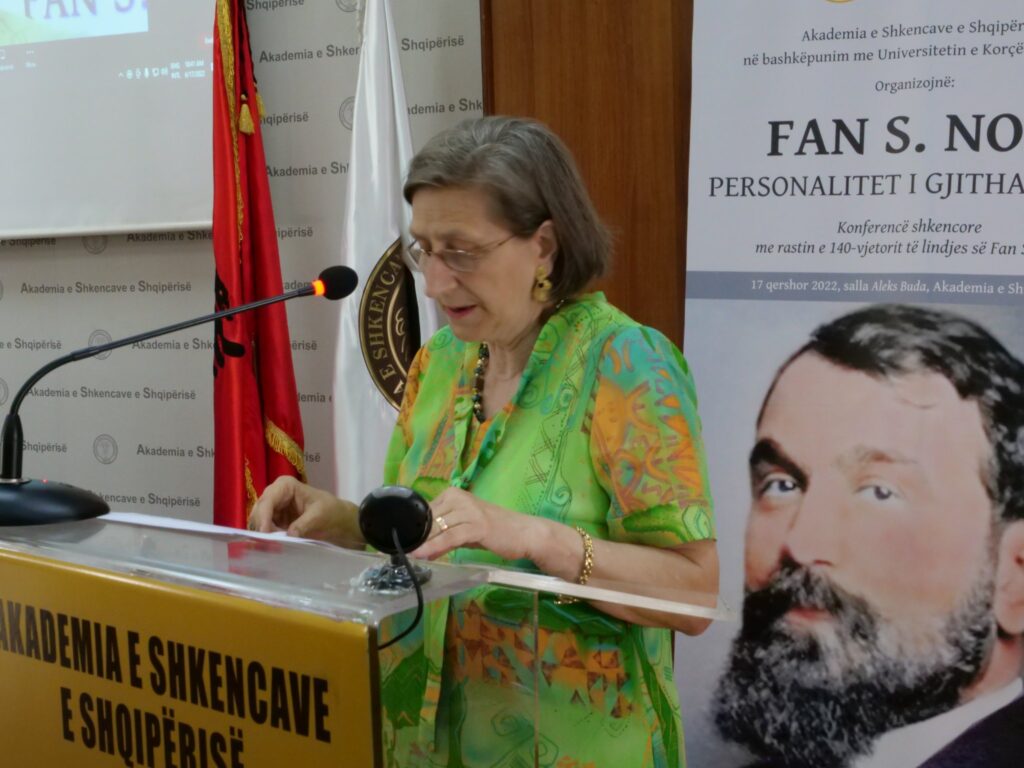 Albanian University participated in the conference“ Fan Noli, a manifold personality” held on the occasion of 140th birth anniversary of Fan.S.Noli, organized on 17 June 2022 from the Albanian Academy of Sciences in cooperation with“ Fan Noli” University of Korça, with the scientific contribution of Dean of Faculty of Social Sciences in AU, Prof. Dr. Kaliopi Naska. The opening speech was held by Academic Skënder Gjinushi, head of Albanian Academy of Sciences and the conference was greeted also by Prof. Dr. Dhimitri Bello, Rector University of Korça and Bishop of Bylis, His Grace Asti on behalf of Albanian Orthodox Autocephalous Church. First panel of the conference was chaired by Academic Shaban Sinani and Assoc.Prof. Dr. Marenglen Kasmi, who gave the floor among other participants also to Prof. Dr. Kaliopi Naska from Albanian University, who presented the work entitled“ Activity of Fan Noli as a politician and legislator at the National Council and Constitutional Assembly serving Albanian State during 1921-1924 period”. She considered Fan Noli as one of most purest figures who dedicated himself to completion of his duty as legislator and politician in the Albanian Parliament, led by healthy national, moral and political principles in establishment of a modern democratic Western state. With his speeches at the National Council, Noli was distinguished for his strong opposition as one of its leaders, offering a precious assistance in creation of democratic ideas, which are up to date even today. Second panel of the conference was chaired by Prof. Dr. Ksenofon Krisafi and Prof. Dr. Kaliopi Naska. Part of the conference was also the opening of an exhibition with works of Fan S. Noli, organised by Albanian Orthodox Autocephalous Church and Albanian National Library.