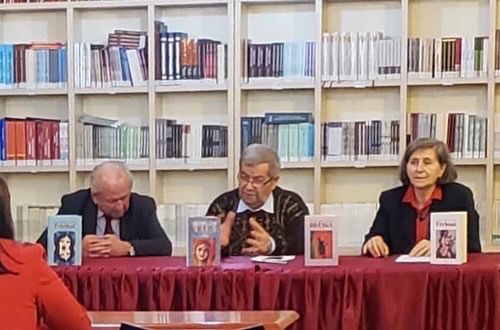 In the framework of support for the Book Fair, as well as a contribution for the promotion of qualitative works and authors, Albanian University held an activity dedicated to well-known writer Xhevahir Lleshi, where were promoted four novels written by him: “Tala”, “Telelkat”, “Tërbimi” and “Brenga”. Attending the event was the writer Xhevahir Lleshi and Rector of Albanian University, Prof. Dr. Pavllo Kongo, as well as invited academicians, lecturers and AU students from the branches of Education, Psychology, etc.In her opening speech, Prof. Dr. Kaliopi Naska underlined that author Xhevahir Lleshi has introduced really qualitative works to reader for years, no matter the difficulties of the present times, not only in the capacity of the author of a series of literary works, but also as a scholar, play-writer, translator with a contribution in the fields of psychology, aesthetics, history, sociology, etc.During the review of the novel “Tërbimi”, Assoc. Prof. Piro Lazi highlighted the psychological intervention in the novel and the social – psychological treatment of the time reality, with a mastery of the author, who touches key vital moments in a realistic and optimistic treatment, as well as with “clear psychological references”.In another analysis of the novel “Telelkat” Dr. Hajri Mandri stressed that the novel was written in a modern style of the todays literary discourse, in internal inspiration poetics in a human mission of the author to address the society and literary language.In her analysis about the novel “Tala”, Dr. Gilberta Hadaj pointed to the dramatic moment expressed in the novel: Albanian state and Kosovo, and writer worried about the Albanian state fate and focusing on the idea of the unification of Albanians.In conclusion, Dr. Arbjola Halimi, who also analysed the novel “Brenga” underlined that the work is a confession about the rich material life of someone with a poor spirit, transmitted through a series of monologues in BrengaAn important part of the activity were the questions addressed by students Uarda Kavaja, Gisela Goleca, Okeda Abaz, Arsela Begaj and Kjara Mishi, which were really appreciated by the writer due to their agility, who then offered respective explanations.